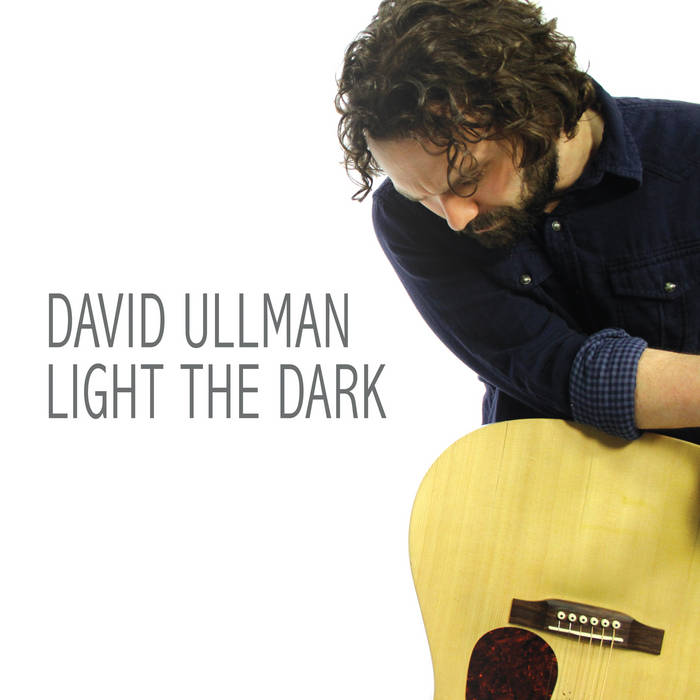 According to NO DEPRESSION, "David Ullman sings with a passion and clarity that belies his relative rookie status." His latest album, LIGHT THE DARK, is hailed by the same authority on roots music as "both striking and sincere. Every track reflects the strength of an artist possessed, one benefitting from both confidence and craft. There’s nothing halfway or compromising about what Ullman does; he puts his all into every offering and the results bear that out, even on first hearing."

A moody mix of haunted hymns, blasphemous ballads, and folk-rock redemption songs, LIGHT THE DARK was recently released in a limited-edition LP/CD combo package on Ullman's own label, Dreaming Out Loud Records.

Largely subsidized by a series of successful fundraising concerts and an online “crowdfunding campaign,” LIGHT THE DARK asks its audience to examine the conflicts between who they are versus who they want to be; where they come from versus where they’re going; and, what they’ve been told versus what they, themselves believe.

“These songs share not only a resilient spirit, but also a willingness to shine a light on one’s self and confront the ways in which we are often our own worst enemy,” Ullman explains. “It’s an album about the ongoing, and often traumatic, process of finding your place in the world--deciding for what, and with whom, you will stand.

“Whereas my first album was written and recorded in a vacuum and performed at gigs after the fact, all of the songs on LIGHT THE DARK were honed and developed on stage. So, the primary goal for this record was to capture the energy and dynamics of my live performances with minimal accompaniment in the hope that audiences will respond as well to what they bring home as they have been to my live show.”

Originally from Northeast Ohio, Ullman’s emotionally intelligent and unabashedly candid debut, DOG DAYS (2008), was deemed “exquisitely beautiful” and “intensely rich” by Cleveland music critics, and the region’s concertgoers were introduced to Ullman over the course of the more than 300 shows he played in support of the album, as well as its singles/EPs “Deja Vu” (2007) and “Secondhand” (2009) and the live “Bootleg” UNPLUGGED @ UNCORKED (2010).

Building a devoted fan base one passionate, furrow-browed performance at a time, the now 34-year-old Ullman began playing clubs, coffeehouses and bars in and around Kent, Ohio in 2005 while finishing college and working twelve-hour-nights in a plastics factory. He’s since left both factory and college life behind, relocating to Northfield, Minnesota and taking his tattered green Doc Martens and his bloodied, battered Martin guitar on the road.

“One of the benefits of beginning your music career in a college town is that, after they graduate, the students who’ve made up your audience either return to where they’re from or move someplace new,” Ullman says. “I’m fortunate to have supporters in some pretty cool places.”

Regardless of the setting, whether it’s opening for acts like Need To Breathe, Chelsea Crowell, Iris DeMent, Hamell On Trial, Josh Krajcik or Rusted Root on theater and club stages; returning to his old stomping grounds to play in the Kent State Folk Festival; or a private house concert, Ullman’s most valuable asset is his ability to relate to an audience.

Listeners easily identify with the extreme highs, the obliterating lows and the hazy in-betweens reflected in his songs. Slightly gravelly vocals, which crescendo from the barest whisper to a barely-controlled roar, lend Ullman’s earnest and raw confessions a grace and sincerity rarely found in today’s music.

“For me,” he says, “even though I might sing about intense, sad-sounding subjects, the goal is always to transcend the darkness by giving voice to it. It’s catharsis. I don’t usually sing songs when I’m happy. I guess you could say I sing sad songs to get happy.”

Thank You - Susie: best. wife. ever. You light my dark everyday; Jack, for all the advice, encouragement and direction; Kyle for your commitment and creativity ; Yost for your initiative, versatility and friendship ; KC for kicking out the jams; BT: badass guitar wizard; Tara for kicking ass and classing up the project; Zach for lending his pen, vox and guitar chops: Namaste; Nate Pelfrey for the fretless action; Nate, Seth & Gina @ Just A Dream Studios; Cary and the RCR Recording Studio Crew; Big Bob & Matt D for the sweet hook-up @ Elevation; Jake for making the ghosts between the speakers dance; Adam for making it all sound sweet but not too loud; Monica, Rae Ann & April for your great ideas & teamwork; Sean, Kris, Dallas and Dawn for the feedback; Abby, for the friendly advice; Terry Durst and The Beachland Ballroom; Timothy Eddings and Musica; The Bushman, Enormity and Mike T; SPECIAL THANKS: Dawn Ray-Novak, Kimberly Ann & all “Fantastic Fuelers”